Dr. Cullen McCarthy is a first year Vascular Surgery fellow at Wake Forest School of medicine.  He attended medical school at University of South Alabama followed by a General surgery Residency at University of Oklahoma

Q: What is renovascular hypertension and ischemic nephropathy?

A: Hypertension as a result of progressive renal artery stenosis

Q: What is ischemic nephropathy?

A: Decreased renal function and/or chronic kidney disease that results from atherosclerotic renal artery stenosis due to a reduction in glomerular filtration rate (GFR) and rise in creatine produced by any cause of diminished renal blood flow that threatens

Q: Who is at risk for ischemic neuropathy?

A: Renal injury can develop in anyone with a kidney or kidney region beyond a critically stenotic artery

A: Yes, and it illustrates the biggest issue we have with renovascular disease.  We know 5-22 % of patients 50 years or older who have advanced CKD have some degree of renal artery stenosis and 23 to 54% of these patients have bilateral renal artery disease.

Q: So not everyone with flow limitations to their renal vascular will get renovascular hypertension or ischemic neuropathy?

A: Not at all, actually. Flow limiting lesions may be an "incidental" finding in patients who have CKD or hypertension that is caused by a separate disorder (eg, diabetic nephropathy and essential/primary hypertension).

Q: So you’re telling me that we have no idea who has clinically significant disease and who doesn’t?

A: No. Fortunately there are clinical findings that suggest that renovascular disease is an underlying cause:

Q: So it matters which kidney is affected or if it’s one or both?

A: Yes, effect of the stenosis may not be clinically apparent due to compensatory function of the unaffected contralateral kidney

Q: What are the pathophysiological mechanisms at play here?

A: Like we said, first you need a flow limitation.  We mentioned several, but by in large There are two major causes of renal artery stenosis: 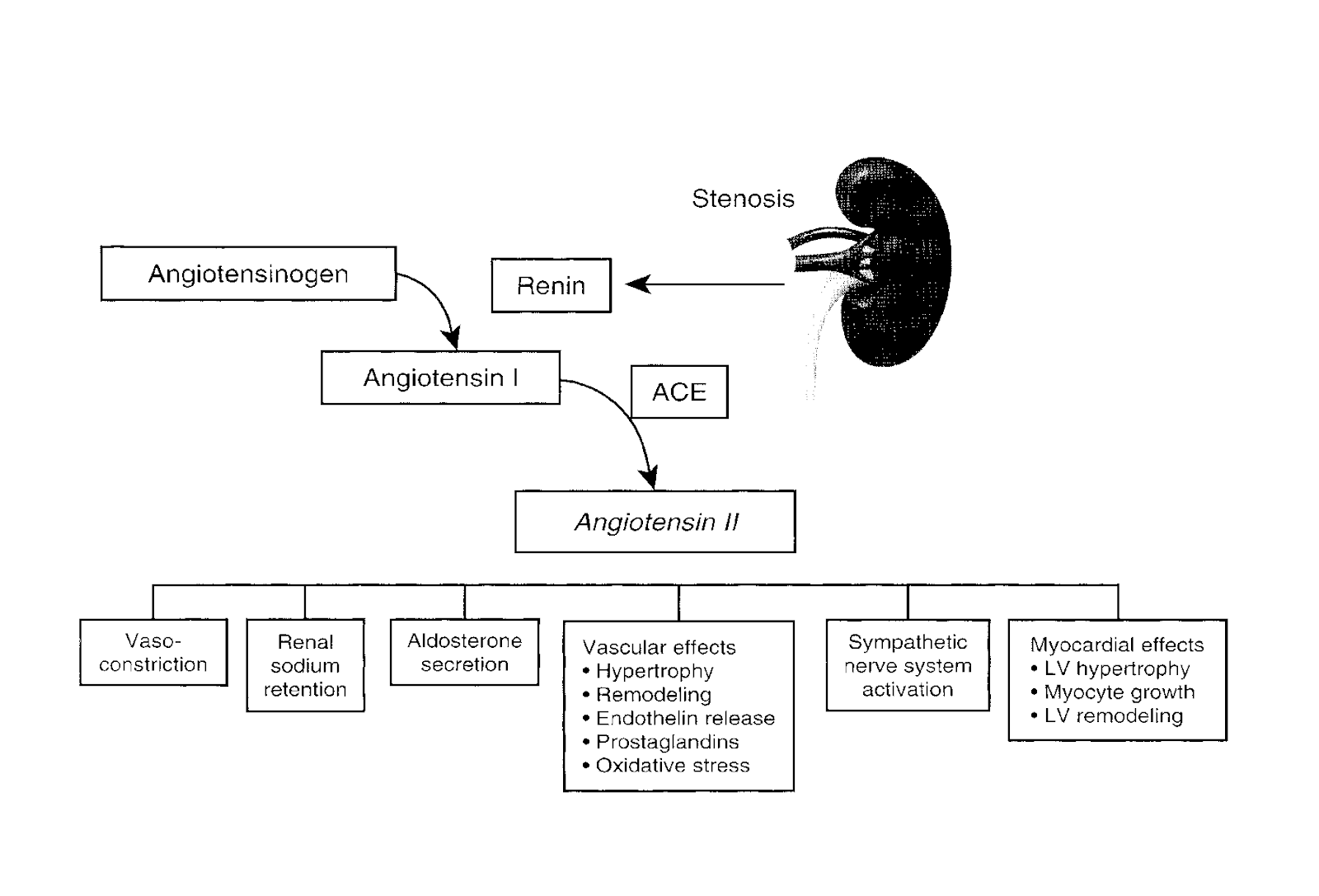 Q: Okay, I think the flow limitation part has been well established.  What next?

Q: Ok, can’t we just treat their hypertension and give these patients an ACE inhibitor at this point?

A: Sure. And oftentimes we do.  In fact, many of these patients can be treated with medical therapy without loss of function or irreversible fibrosis, sometimes for many years

A: As the hypertension is treated, we’re lowering the pressure gradient across the stenosis and can actually increase the degree of renal malperfusion and worsen the renal function.

Q: Can we tell who has cortical hypoxia through diagnostic tests?

A: To some degree. Cortical perfusion can be measured by blood oxygen level dependent magnetic resonance (BOLD-MR). Additionally, inflammatory markers sampled from renal veins of stenotic kidneys correlated strongly with the degree of hypoxia (as measured by BOLD-MR), particularly after correction of the stenosis with angioplasty

Q: Ok, so we have a patient with evidence of malperfused kidneys, either through worsening renal function or uncontrolled hypertension, with known discrete stenoses, and we even got a BOLD-MRI which confirms it. Let’s just revascularize them and be done with it?

A: Not so fast.  Although vascular stenosis or occlusion can initiate these processes, long-standing ischemia causes parenchymal injury characterized by inflammation and fibrosis which eventually becomes an irreversible process. At some point, restoring renal blood flow provides no recovery of kidney function or clinical benefit.

Q: So how can we determine who has CKD or hypertension due to renovascular stenosis that we can actually help?

A: This is probably the most important question since in this whole disease process.

Q: But how do we know the vascular occlusive disease posing critical hemodynamic limitation to kidney function?

Q: Most importantly: is the condition of the kidneys such that restoring renal blood flow is likely to benefit function?

Q: Ok, let’s go through some of these: Renal Resistive index:

A:  Some studies indicate that elevated resistive indices in segmental vessels (above 0.80) measured by duplex ultrasound denote poor prognosis for renal recovery while a low resistive index is a favorable sign.

Some investigators have recommended assessing morphologic parameters, such as renal parenchymal volume and cortical thickness with MRI, and comparing these parameters with kidney function measured by radionuclide scanning

Q: So how do we get a definitive diagnosis?

Q: Ok, at least now we think our patient’s renal artery stenosis maybe is causing hypertension or decline in renal function and we can possibly reverse it… how do we treat it?

A: For starters, all of these patients should receive medical therapy to control their hypertension in addition to routine CKD care and surveillance.  They need to be aggressively treated for secondary prevention of cardiovascular morbidity with aspirin, statins, cessation of smoking, and, in patients with diabetes, glycemic control.

Second, once diagnosis has been made we have 2 therapeutic alternatives…

A: First, medical therapy alone- this generally involves ACE-I or ARB and as we discussed.

Hemodynamically mediated acute kidney injury is the major limitation of ACE inhibitors and ARBs in patients with bilateral renal artery stenosis as lowering the systemic blood pressure is more likely to reduce the renal perfusion and thus the intraglomerular pressure below the limits of renal autoregulation… in turn lowering the GFR.

Q: Okay, in other words we can have chronic normalization of the systemic pressure that might eventually lead to ischemic atrophy due to the reduced renal perfusion pressure distal to the stenosis? Any other concerns with medical management alone?

A: We’re addressing or prevention progression of stenosis in those with atherosclerotic disease.

Q: Ok, since this isn’t a vascular medicine podcast, what’s our other option?

A: Procedural intervention (open or endovascular) along with medical therapy.

Now you’re talking.  Who should we fix operatively?

Q: But do we have any good data proving our interventions help?

A: This is where things can get muddy.

Early on, observational studies demonstrated a high rate of procedural success with percutaneous transluminal renal angioplasty (PTRA) and stent placement (~85%) in patients with ostial atherosclerotic disease, as well as a high rate of clinical success measured by improvements in blood pressure and kidney function in 50 to 75 % of subjects.

Q: Anything better than observational studies?

A: Unfortunately, randomized trials showed no additional benefit from stenting when added to medical therapy with respect to blood pressure control, renal function, cardiovascular events, and mortality.  But these studies have their own limitations.

The one we keep hearing about is the CORAL trial.  Tell me about that.

Ok, we’ve determined our patient is an appropriate candidate for intervention, and we don’t fully buy into CORAL, what can we do?

What about an open operation?

So who still gets open repair?

How do outcomes compare to PTA/stenting?

So why not do it instead of stent?

You mentioned FMD as a cause of renovascular hypertension, tell me more about that…

How do we classify it?

Where does it occur?

Does FMD present differently that the atherosclerotic renovascular disease we talked about?

What are the common presenting symptoms and signs

Are these dissections common?

So should we screen for these dissections in a patient with known FMD?

When should we suspect FMD?:

How do we diagnose this and/or distinguish it from renovascular atherosclerotic disease?

What about non invasive testing?

Any place for pathologic diagnosis in modern therapy?


So how do we treat this, what warrants intervention and are those interventions different than what we offer atherosclerotic disease of the renal arteries?

But what about revascularization?

Well then who do we treat?

And what kind of results do we get with revascularization?

What options do we have in terms of revascularization?

Do we have good results treating FMD with these?

How do these compare?

So why choose open surgery?

So how do we perform Percutaneous transluminal angioplasty for FMD?

Why not place a stent?

Do we ever place stents?

And we’re getting good outcomes with PTA alone?

What should we do if it doesn’t work?

What kind of complications do we see after this?

For everyone? What about for pediatric patients?

How does this compare again to PTA?

What’s Monitoring and follow-up look like for these patients?